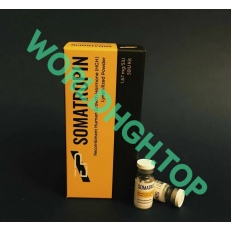 Omnitrope can rightly be called an example of the quality of products of the Austrian company Sandoz. The product is recognized by the world, having passed many tests and analyzes, as there is relevant documentation.

This recombinant GH analogous to human growth hormone, represented by a chain of consecutively joined amino acids, Omnitrope has an anabolic effect on the human body. For the introduction of the drug, you need to use a special pen-injector (pen 10). The device can be bought in our store.

Somatropin has a pronounced effect on the metabolism of fats, proteins and carbohydrates. In children with a deficiency of growth hormone, somatropin stimulates the growth of the bones of the skeleton in length, affecting the plates of the epiphysis of tubular bones. In both adults and children, somatropin contributes to the normalization of body structure by increasing muscle mass and reducing body fat. Visceral adipose tissue is especially sensitive to the action of somatropin.

You can buy Omnitrop in our store. We guarantee excellent quality and fair price. By purchasing Omnitrop from us, you can be sure that the product was stored in accordance with the requirements.

Omnitrope pen you can order separately in any pharmacy if you need it.