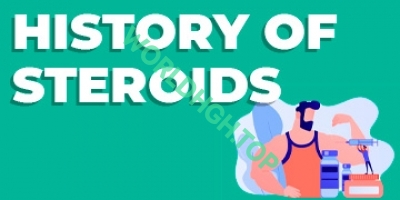 Even though an athlete can increase his muscle mass without steroids and achieve quite professional results, almost any bodybuilder takes the drugs which help to gain the needed strength faster and more efficiently. Being not involved in competitive bodybuilding, a man can take them to improve his appearance and health. What do we know about steroids? What is history of steroids in sports?

Steroids as they are

First, we’d like to put some clarity into the subject. The steroids are the compounds structured in a particular way which are able to act as natural hormones. There are corticosteroids and anabolic steroids. The former is used for medical purposes to reduce inflammation while the latter is mostly popular among bodybuilders mimicking the natural testosterone – the male hormone helping to get the male character including big muscle mass.

The anabolic steroids are considered to be a particular drug class containing about two dozen products used by male athletes and non-athletes to build muscle. Though female bodybuilders can also take some of them in a smaller amount. Some steroids are available without prescription. There are drugs banned in certain countries.

The history of steroids

The anabolic-androgenic steroids come from ancient times. Long ago the farmers noted that the domestication of wild animals is much easier when they are castrated when production of the reproductive hormones is ceased. Thus, the impact of testosterone on appearance and behavior became obvious. The scientists were looking for the sources of the hormones in nature. Later they learnt the way to create their artificial synthesis. Nowadays this subject is still highly discussed in the scientific environment. As steroids are able to treat a wide range of disorders but at the same time they have severe side effects. For instance, in 1886 a cyclist died during the competition racing on the route from Bordeaux to Paris. The physicians believed that it happened because the sportsman took a stimulant.

In 1935 scientists from Germany created anabolic steroids. That was the new way to treat the deficiency of testosterone and its developer won the Nobel Prize for his achievements in the sphere of sex hormones. These natural substances with the structural similarity were supposed to be used for medical purposes only. They were cheap analogues of the ones extracted from animal fluids and tissues. So, the chemists mimicked nature by creating steroids in the labs. Since that time the technologies have been updated and now we get safer steroids coming with more effect.

In competitive bodybuilding the history of anabolic steroids commenced in the 1960s. They changed the approaches and standards in this field. The sport of powerlifting was very popular and the teams from various countries used testosterone injections to get the needed strength and appearance before the competitions. The thighs and shoulders of athletes became more massive. The new products were produced with even more muscle-building benefits and with low androgenic side effects which could cause prostate enlargement. The steroids were used not only in bodybuilding but in all sports to increase durability and strength.

Soon the International Olympic Committee banned anabolic steroids and introduced the rules of drug testing for the participants of the competitions. In 1990 the anabolic steroids were officially classified as a schedule III controlled substance, meaning that their trafficking was forbidden. The sportsmen using performance-enhancing drugs were ejected from competition. Starting from 2000 the cases of diseases caused by steroid abuse increased. The athletes proved that they were suffering from heart disorders, liver issues, problems with testicles and breasts, infertility, mental and psychological conditions like depression.

Since that time things have changed. There is a comprehensive idea about consequences of steroid abuse and strict recommendations as to their administration. Now an athlete can show the best performance by taking steroids and stay healthy if he keeps things under control, and does not exceed the duration of the course and dosage of the drugs.

Even if a bodybuilder follows a balanced diet and works out regularly, he will not be able to achieve the same result for the same period of time. It is not enough to take proper care of the body to approach fitness. Only by taking steroids an athlete can reach impressive goals. Of course, it does not mean that it should be done “at all costs”. The athlete is expected to adhere to the rules and take the quality product at the allowed dose and for a recommended period of time to avoid side effects. Thus, history of steroids in bodybuilding is not over. It affords growing opportunities.