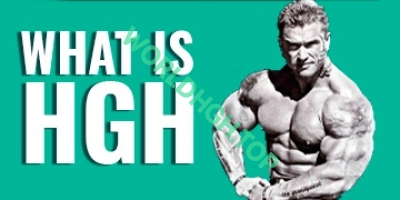 HGH, also known as somatotropin, is the 191-amino acid human growth hormone. Secreted by the anterior lobe of the pituitary gland, the growth hormone of huge importance in human development, thus, it participates in many processes in the human body throughout life.

Human growth hormone is responsible for muscle growth and bone, fat burning and skin regeneration. It also helps a human body to metabolize carbohydrates, proteins and fats. There’re more than 100 forms of naturally occurring HGH hormone and 20 types of amino acids that the hormone’s molecule consists of.

Its synthetic form called rHGH (recombinant human growth hormone), synthesized in E.coli that facilitates final purification, was introduced in 1985. One of its forms existing in the pituitary gland – 22-kDa isoform – amounts to 20% of all HGH produced in the body.

This protein hormone is synthesized and secreted (different processes, aren’t designed to coincide) by somatotrophs – the cells in the anterior pituitary. HGH production is modulated by a number of factors, but its level normally remains the same all day long while the levels of its secretion, on the opposite, constantly change, being regulated by somatoliberin (growth-hormone-releasing hormone) and somatostatin (growth hormone-inhibiting hormone), both secreted by hypothalamus. Thus, the former stimulates the secretion of HGH, while the latter inhibits it. Their levels change throughout the day, thus enabling HGH secretion into the bloodstream.

HGH has two ways to influence the body: it either does it on its own or through the somatomedins, the proteins produced by the liver: IGF-1, IGF-2 and Vitronectin.

IGF-1, also known as somatomedin C, stimulates the growth of a variety of tissues (including muscle tissue), as well as facilitates fat loss, promotes bone growth and helps to heal the injuries. Its production site and a major target organ is a liver, but it is also produced (less intensively) in the target tissues.

IGF-2 is structurally similar to insulin, secreted y the liver. It enables cell division, including muscle and bone cells. According to the research [1], local injections of IGF-2 can stimulate the development of the bones.

Vitronectin isn’t under-explored so far. At the moment, it’s believed that it potentially has anabolic functions.

HGH itself impacts the body as well. For example, it increases metabolic velocity (REE) by 20%, what makes human growth hormone useful for weight loss [2].

The effects of HGH

The hormone secretion occurs every 3-5 hours, amounting from 1 up to 5-10 ng/ml and peaking in the beginning of the night (70% of its daily amount are released at this time).

HGH level declines with age. The HGH levels peak during puberty (2 mg - about 6 IU - of HGH per day) and begin to dramatically decline after the age of 30: that’s when many people are likely to experience the first symptoms of GH deficiency. The hormone levels decrease to  0,2 mg in the early forties. Changes in HGH levels with age impact the appearance, reflecting in muscle mass loss, weight gain and development of wrinkles.

It is important to sleep well because HGH peaks during the first four hours of sleep.

The effect of exercise on GH secretion has been widely researched.  Kraemer and Godfrey [7,10] explored the response of HGH to heavy-resistance exercise through several experiments. They focused on such factors as the lifted weight, the number and duration of sets, real time between sets.

Basing on the results of their work, here’re the main training principles for GH secretion increase.

W.M. Hunter [9] held an experiment to prove that aerobic exercises are able to boost HGH secretion up to 40- 100 ng/ml (see the picture) – 8-20x more than the average daytime level! The reason lies in the high level of fat acids in the body during the aerobic workout: the pituitary has to secrete more growth hormone to get rid of the fatty acids.

Initially, rHGH was synthesized to treat children with HGH deficiency. But now hgh and peptide (for example, ipamorelin) has more ways to use, including anti-aging recombinant growth hormone therapy and sports.

HGH rapidly gained popularity among bodybuilders due to its anabolic effects, such as the facilitation of muscle growth and fat burning.

Bodybuilders should use it for at least 2-3 months to achieve significant results. The dosage depends on such factors as the purpose, the athlete’s weight and his or her experience, usually it varies between 4 and 20 ius. Good fat burning effect is already achievable at the level of 4-8 ius, but muscle growth requires 10ius per day and more.

HGH half-life period is 4-6 hours, thus, an athlete needs 3 injections per day, the pauses between injections should be equal. The first injection should be made in the morning, the next one should follow 6 hours later.